Her story is one of desolation and isolation. She often lacks food, clothing, or shelter. Chances are, alcoholism has bruised her family in some way. It seems as if her only purpose in life is to bear children, and she mothers several. She feels used.

She’s a woman of few words. The nearest village to hers is at least 50 miles away. She probably doesn’t have a TV, so her connection to the outside world is a radio. She believes she is sentenced to a life without hope.

This is a portrait of one woman in the target audience for a unique Stonecroft Bible Studies (SBS) outreach in Alaska. Stonecroft volunteers know there is more to life for the thousands of Eskimo and Native American women in remote areas of their state. These volunteers work diligently to bring the message of Christ over the radio to Alaskan native women where they are, as they are.

In collaboration with Voice for Christ Ministry radio, women associated with the Mat Su Valley Women’s Connection huddle around microphones to record their SBS discussions. “The difference is we’re in a sound booth instead of a home,” explains Anita Bacon, outreach coordinator.

“Most native Alaskans are auditory learners, so radio has a great impact on them,” Anita says. Through various stations and radio networks, the program could potentially be heard in as many as 300 native villages. Many of these locations can only be reached in person by pl 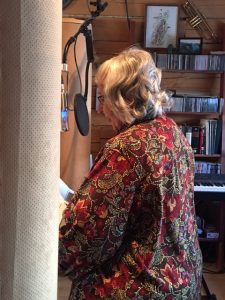 Two teams have almost completed three of the SBS Introductory Studies (Who is Jesus?, What is God Like?, and Connecting with God). That’s about five months of recordings. The goal is to have a year’s worth of 15-minute sessions completed before the segments air.

Each team consists of three SBS participants and two editors. Team members are veteran SBS participants who are also trained Stonecroft speakers. They share the Gospel and their three- to five-minute testimonies – which are shortened to one- to two- minutes for radio. They have hearts for presenting Christ’s message in- and outside of Stonecroft.

Alaskan native women don’t speak a lot. “Instead, they listen to your spirit,” Anita says. The SBS discussions are sensitive to this, keeping words to a minimum and staying culturally relevant. Team members are well acquainted with the culture because most are Native Alaskans, including a chief’s daughter. A retired education administrator who has lived in more than 40 Alaskan villages also serves on a team. In addition, a Native New Life ministry staff person coaches participants at the recordings. Choosing the right words is a crucial, yet time consuming, part of the process.

Team members know from experience that the benefit of transformed lives far outweighs the time and energy put into outreach.

“The Gospel is the only hope for these women. They come to Jesus. They start lifting their heads. They share what has happened to them,” says Anita. “They have words of life.”