They ride bikes. They play video games and compete in sports just like other kids their ages. But military children also have different experiences than their peers from civilian families. Some of these experiences are fun. Some surface as struggles. In honor of April, the Month of the Military Child, Stonecroft talked with the Moos brothers of Louisiana. Their father serves in the Air Force and is currently stationed in Turkey. Daegen, age 9, and Dyson, 6, describe what military life is like for them.

One of the best parts of being a military child is the ability to make friends from all over the U.S. and even some who have lived or are now living in other countries, says Daegen. His favorite memories involve his best friend Ryan in Cheyenne, Wyoming. Ryan had moved to the U.S. after a time in Norway. The two adventurers explored their neighborhood on their bikes. They enjoyed special times playing video games in each other’s homes. They were best buds.

Opportunities to experience new places is another benefit of being a military kid. Like Ryan, Daegen spent his early years in Europe when the family was stationed there. Daegen was born in the Netherlands, a fact he’s quite proud of. He was too young to remember a lot from this time, but he does recall a fun trip to France and seeing the Eiffel Tower in Paris.

The third-grader wouldn’t mind returning to the Netherlands someday. “Any chance I get, I’ll most likely take it,” he says.

After the Moos family returned to the States, the family ended up in Cheyenne. They lived there for seven years and became part of the fabric of the community. Better yet, the community became part of them. They fell in love with the family-friendly environment, bought a home, found a wonderful church, got to know their great neighbors, and enjoyed the outdoors. Their mom, Ashley, attended Stonecroft Military events and Daegen remembers a fun pirate party put on by the ministry.

But military life doesn’t keep you in the same spot forever. Now residing in the balmy South, first-grader Dyson misses Wyoming in winter where he played in the snow. 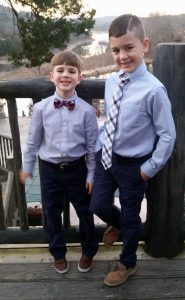 “What did you like to do in the snow?” the writer asks.

“What did you do with the snowballs?”

“Throw them at my brother,” he responds matter-of-factly.

The hardest part about being in a military family is when their father is assigned away from home. When he’s gone, they really miss their dad’s routine of tucking them in at night. It’s their daddy-sons’ bonding time, their special “thing,” to talk, relax, and spend time together before they go to sleep. That’s also what they seem to get excited about most on his return home.

When their father was assigned to Turkey, Ashley and the boys moved to the South where they could be near their extended family. Leaving friends is the second hardest part of being a military kid, the brothers agree.

Sometimes it’s your friends who move away and sometimes you’re the one to move, they explain. Daegen says the bad parts are leaving friends, having to make new ones, and sometimes being teased when you’re the new kid because you don’t know much about your new community.

Both boys have the same advice for their peers when relocating to a new area: talk to God. They say they’ve prayed for God to comfort them and help them through the transition. The brothers also suggest talking to parents.

Daegen adds that attending church helps them during these times, too. Even at their young ages, the boys are strong in their faith. Daegen’s favorite Scripture is John 3:16; Dyson’s favorite Bible story is Moses as a baby floating in a basket.

The brothers stay busy as multisport athletes. Both boys play baseball, basketball, and soccer. Dyson adds football to his schedule, too.

A month honoring military children is a special observance for the boys. “It’s good to know all us military kids are appreciated and recognized,” Daegen says. “It makes me feel real happy and excited. I’m just a happy kid!” 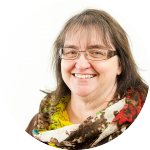