Stonecroft Women Shine the Light of Jesus during the Holidays

Here are just a few ways Stonecroft women have spread the light of Jesus Christ in their communities during this holiday season:

Stonecroft volunteers in Longview, Texas, organized “Light the Night, a Christmas outreach in early December, attended by about 130 area women. The event was a free holiday banquet for women from homeless shelters and other women who are lonely or who might not get invited to Christmas parties, said Christine Smith, Co-Leader of a Stonecroft hub that spearheaded the outreach. The banquet featured a catered meal, a vocal soloist, a speaker, door prizes, and other giveaways.

“Of course, the most important thing was offering these women hope and belonging through Jesu 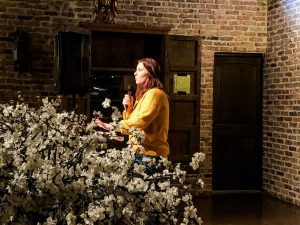 The hub’s Co-Leader Lori Bernethy, who herself lived in a homeless shelter for a time, shared the Gospel during the program. Lori told how her faith in Jesus has helped her overcome times of darkness, including the tragic death of her 30-year-old husband in February. Lori instigated and planned the hub’s first “Light the Night” Christmas banquet in 2018 after she sensed God wanted her to host a party for women who feel left out.

Women from the Neenah, Wisconsin, Fox Valley Women’s Connection (WC) gathered in late November to stuff Christmas stockings with gifts for women in two homeless shelters in their area. Stonecroft Regional Administrator Sue Harvey said the project drew active WC group members as well as some women who rarely attend the group’s outreach luncheons but wanted to help with the Christmas outreach. Some of those women brought friends who assisted with the effort, too. 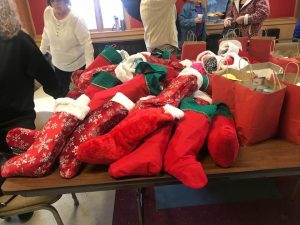 “We were surprised by the turnout!” said Sue, who also serves as the group’s Chair. “It was a great opportunity to build relationships. We hope to plan more gatherings like this in the future.”

The women enjoyed a time of snacks together and prayed over the 55 stockings full of gifts before these were delivered to the shelters.

How did you or your group spread the light of Jesus over the holidays? We’d love to hear your story! Send it – and photos if you have them – to connections @stonecroft.org. If you send photos, please include a signed group image consent form. 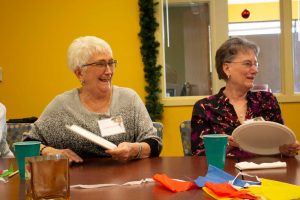 Seven retired Stonecroft staff members living in or near the Kansas City area shared inspiring stories of God’s faithfulness in their lives and ministries during a Dec. 11 Christmas luncheon with current staff at the Kansas Home Office. Some of these retirees served alongside Stonecroft founder Mrs. Helen Duff Baugh and Miss Mary Clark, Mrs. Baugh’s ministry partner. Others filled key leadership roles during later transitions in the ministry. Two served as what previously were called National Representatives or “city girls,” who traveled extensively to establish Christian Women’s Connections in cities across the country.

Retiree Sandy Warnock, who served first as a National Representative and later in various other staff positions, told how she was introduced to Stonecroft after receiving Jesus as her Savior at a Christian Women’s Connection luncheon in the Kansas City area in 1978. She got involved in Stonecroft Bible Studies and prayer groups and later became Chair of a Stonecroft Christian Business and Professional Women’s group. While she was a Chair, God called her to join Stonecroft’s staff in 1997. As a volunteer and later a staff member, Sandy said she observed and experienced personally “the beauty and power of prayer – and the dependency on prayer – that has marked this ministry. Prayer is key to everything Stonecroft does.”

In Case You Missed It

Looking for a new Stonecroft Bible Study for your group? Check out our updated version of Why Believe?, available at stonecroft.org./store. It’s a four-chapter study inviting you to investigate scientific and historical evidence that backs up the Bible’s claims that God exists, He left a message for us, and He desires a personal relationship with you. Why Believe? is an excellent resource to help you and other Christian women in your group learn to explain your faith – and to help nonbelievers explore the idea of beginning a forever relationship with Jesus. The revised study combines information found in both the guide and study books in our classic version of this apologetics Bible study. Information based on new discoveries has been updated. Great for small-group or one-on-one study! Order today at stonecroft.org/store or call 888.819.5218. Plus, don’t miss this short promotional video about Why Believe?