Cuban Immigrant: ‘I Thank God a Million Times’ for Stonecroft 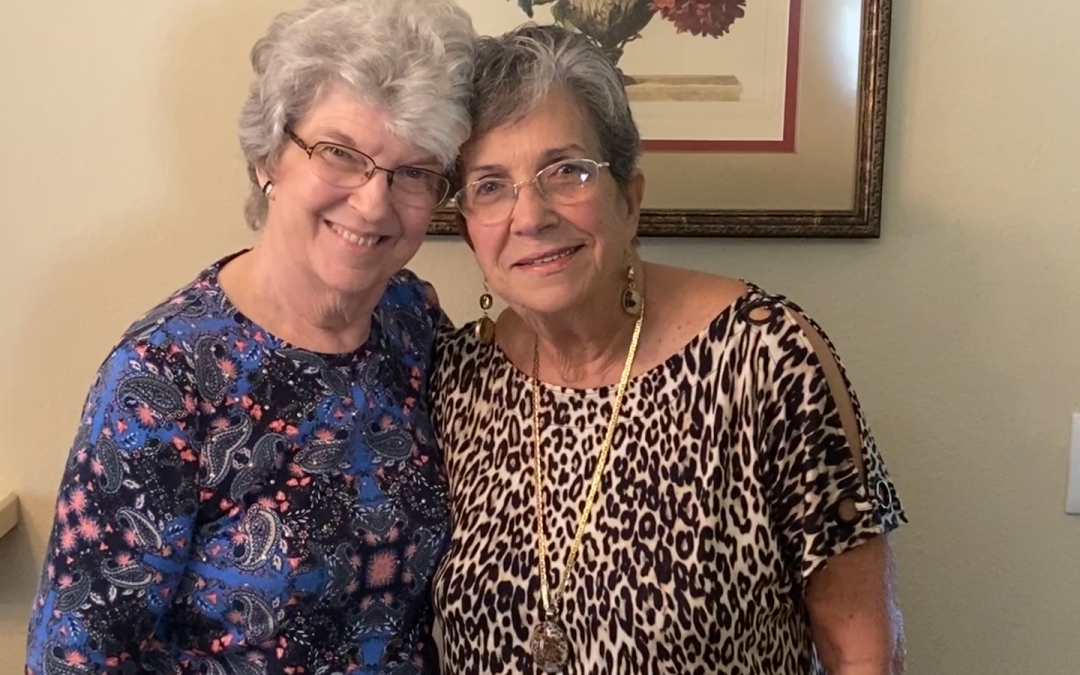 (From left): Ann Pike, Stonecroft Bible Studies (SBS) guide, and Tita Godoy share a moment after a recent SBS in Tita’s home. “Ann has been a great example to me of what a real Christian is,” Tita says.

Tita Godoy pushed her shopping cart down aisle after aisle of a Lakeland, Florida, supermarket. As she entered each aisle, she passed the same woman.

“We’ve got to stop meeting like this!” joked the woman, Stonecroft volunteer Nelda Reis.

Nelda introduced herself, and Tita shared that she and her husband had just moved to Lakeland. Nelda invited her to the next luncheon of the Lakeland South Christian Women’s Connection (CWC). Tita declined, but Nelda got her contact information and kept in touch.

Nelda continued to invite her to the luncheons. Tita always had excuses for why she couldn’t go.

“I told my husband, ‘I’ve got to get rid of this lady! She’s driving me crazy talking about those luncheons!’” Tita recalls. “‘So, I’m going to go once – then that will be it.’”

Tita was in for a surprise.

At the luncheon, she listened as Stonecroft Speaker Maria Goodsell told about surviving a concentration camp in Eastern Europe and emigrating to the U.S.

“I was so touched by her story,” Tita remembers.

She related to it because Tita and her husband, Julio, had themselves experienced persecution in their homeland of Cuba. The reason: In the 1960s, Julio, a pediatrician, had vocally opposed the communist Castro regime. The couple finally came to the U.S. as political refugees in 1970, after waiting a decade for permission to leave.

“The hardest thing was leaving our family, thinking we’d never see them again,” Tita says. “We came without a penny in our pockets.”

Cuban friends in New Jersey helped them get established there. The couple struggled to learn English, but nine months later Julio passed the foreign medical exam and later several state medical licensing exams. He went on to become a successful neonatologist in Corpus Christi, Texas.

After retiring in Miami near relatives, Tita and Julio decided to move to a smaller, quieter city. They settled in Lakeland, not knowing anyone there.

Tita soon discovered the sisterhood of Stonecroft in her new community.

After her first CWC luncheon, she kept going back. Tita was drawn to the Speakers’ stories and their focus on a forever relationship with Jesus.

“That was a new idea for me,” says Tita. “I believed in Jesus but didn’t have a relationship with Him.”

One day a woman at her table invited her to a Stonecroft Bible Study (SBS) led by Ann Pike, their CWC Chair and a Stonecroft Regional Administrator. Tita had never read the Bible and welcomed the opportunity.

Tita Godoy (row 1, second from right) and her Stonecroft Bible Study group meet around her dining room table every Tuesday morning. “Tuesday mornings are sacred in my home,” Tita says.

Today, Tita enjoys a close relationship with Jesus and studies the Bible daily. “I have so much peace in my life now,” she says.

She shares the source of that peace with relatives in Miami and Cuba by emailing them Scriptures and prayers. She explains how they, too, can have a relationship with Jesus.

Tita also serves as CWC decorations chair and hostess of Ann’s SBS group. Hosting the study is so important to Tita that the size of her dining room – where SBS women gather around her table – was a deciding factor when she and Julio searched for a smaller house while downsizing.

“The house had to have a dining room big enough for the table for the SBS ladies!” Tita explains.

After the couple found the right house, the SBS group dedicated it to God. That was in October 2014 – 44 years after Tita and Julio left Cuba.

Reflecting on what God has done through those years, Tita is especially grateful for the day she met Nelda at the grocery store.

“I thank God a million times for that lady – and for Stonecroft!” she says.