The Miracle of a Meeting 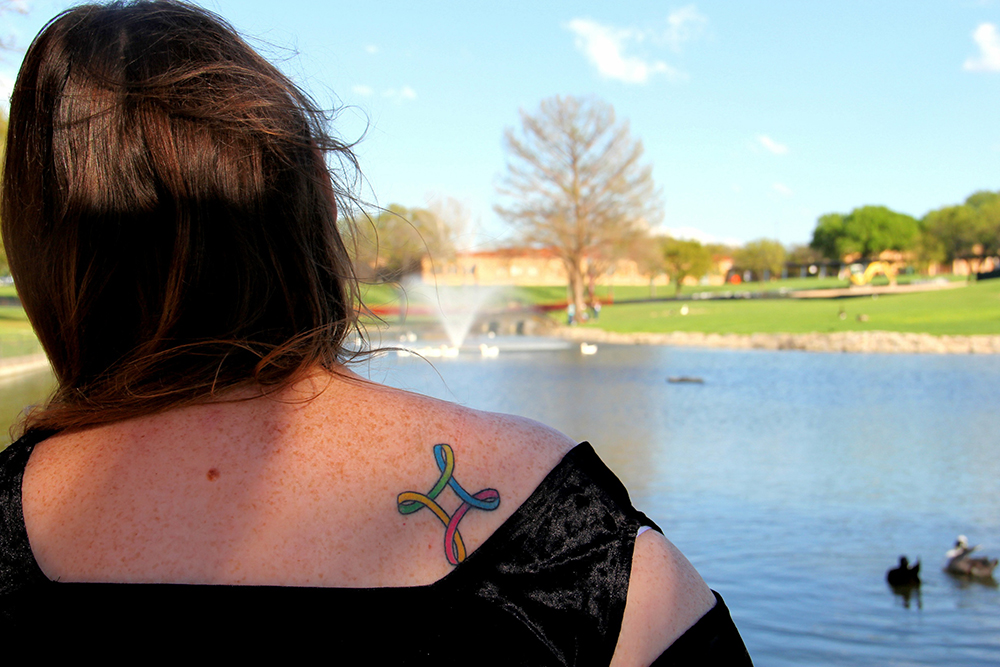 Belinda Cox stood before the group, shaking with fear. She held up a police mug shot of herself.

“That was me four years ago,” she said.

Belinda was the final speaker at Story Marks, a Stonecroft outreach where women share the stories behind their tattoos. Sage Appleby, leader of the local Stonecroft hub* that sponsored the event, listened offstage as Belinda addressed the crowd gathered outside a Killeen, Texas, coffee shop.

“I was nervous. I didn’t know how it would go,” recalls Sage. “But I knew God wanted her to share her story.”

Sage had placed an empty chair in front of the audience just before Belinda got up to speak. Standing near it, Belinda told a story few people in her life had ever heard.

“I couldn’t get my words out at first,” Belinda remembers. “But then God started speaking through me.”

Belinda described her years as a homeless drug addict, working the streets to support her habit. She had no family or friends. She wanted to die.

She remembered praying to Jesus as a child and wondered: Could Jesus love me?

Belinda’s tattoo tells how she found the answer. It’s the cross-shaped logo of Stonecroft, formed with colorful ribbon-like loops.

“Every time I look at it, I remember the day the women of Stonecroft became my family and this tattoo became my story of belonging,” she told the crowd.

Sage thought back to that day. For five years, Texas women had prayed for a way to bring Stonecroft to women at Fort Hood – one of the nation’s largest Army posts – and in the surrounding communities. The answer came in the form of the Fort Hood/Killeen hub. Sage had worked hard to plan the new hub’s first meeting, and she wanted things to go smoothly.

Instead, everything seemed to go wrong.

A rainstorm caused intermittent outages in the internet connection, and Sage’s program depended on that connection. She’d invited about a dozen women new to Stonecroft, including Belinda, who’d recently visited Sage’s church. Sage planned to introduce them to the ministry by walking them through its website and sharing her own Stonecroft story.

When the meeting began, Sage tried an icebreaker another leader had suggested: Each participant anonymously writes on a card something she’s thankful for. The presenter collects the cards, reads them aloud, and participants guess who wrote what.

Belinda took a blank card and jotted “sobriety” on it. “I didn’t have a clue everyone was going to try to guess whose paper was whose,” she recalls. “When I realized that was happening, my heart was on the floor.”

Sage’s heart sank a bit, too, when she drew Belinda’s card from the stack. She knew nothing of Belinda’s story then but sensed the card might be hers. I can’t believe I did this activity without thinking someone might write down something so personal, Sage thought.

She breathed a prayer – and read the card to the group.

Belinda immediately claimed it. “Then my brain shut down,” Belinda relates. “I didn’t hear anything else.”

Until the laughter started. They’re laughing at me! Belinda thought.

But they weren’t. By then the icebreaker was over and group members were joking about one woman’s red rain boots. The women drew Belinda into the conversation and soon she felt “like one of the girls.”

“That meeting changed my life,” Belinda told the Story Marks audience at the coffee shop. “I thought these women would look down on me. But they accepted me right where I was. For the first time in my life, I felt like I belonged.”

Belinda told of reconnecting with Jesus – and invited her listeners to begin a relationship with Him, too.

Then she pulled out the chair Sage had placed nearby. “This chair is for someone like me,” Belinda said. “I don’t know who it is, but someone here needs the love of Jesus like I found.”

Seated in the audience, Suzy Shepherd, Stonecroft’s Central Divisional Field Director, listened in amazement. “Belinda’s story wrecked me when I realized what drew her to Jesus. It was simply that culture of belonging Sage created at her first hub meeting.”

It’s a culture shaped by Christ’s love. “Where she is, as she is. That’s Belinda’s story,” Sage says. “We loved her before we knew her story. And we loved her even more afterward. That’s the miracle of Stonecroft – sharing His unconditional love and seeing it change a life.”

*A Stonecroft hub is a community of women who gather for fun, relationship building, training, prayer, and planning creative, relevant ways to reach others in their circles of influence with the Gospel. To learn more, visit stonecroft.org/about.

Editor’s Note: Sage and her husband, Paul, recently relocated to the Dallas-Fort Worth area. She is stepping into a new regional role to develop hubs.